Global consumption of coal, the most polluting fuel has registered its biggest decline in history. 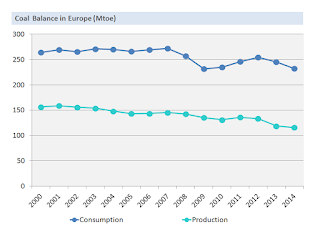 This historic fall was caused by rising renewable energy uptake, a weak global energy demand, and China’s battle against pollution. Coal business has been hit hard by the increasing numbers of power plants switching from using coal to using natural gas for power generation. According to a report published by Greenpeace, global coal consumption is down in a range from 2.3% to 4.6% from January to September this year, if compared to the same period of last year.
China has reduced its coal consumption by 4% this year, while coal imports fell more than 31%. Meanwhile, in the US, coal registered an 11% decline in the first seven months of this year. In Europe, the biggest regress was seen in the UK, where the coal use fell by 16%, aiming to become entirely “clean” by 2020.  [emp]
Lähettänyt Olavi Tupamäki klo 19.42